Last December (2019), quite by chance, I found a treasure in Jackson. On the way to Jackson Ice to buy ethanol-free gasoline, I saw a car at the old Morris Ice Company warehouse at 652 S. Commerce Street. Next to the building, an old electric pump partly smothered with vines called out to be photographed. A young fellow, Mr. Jack Pickering, looked at my Hasselblad camera with interest and said he had recently bought the building along with 4 acres of land from the heirs of the Morris family.

A story in the Jackson Business Journal describes Mr. Pickering's ambitious plans:  https://msbusiness.com/2019/01/old-ice-plant-to-turn-back-pages-of-downtown-jackson/.
He plans to convert the shop into a party/band/restaurant/function place. As of 2019, Pearl River Canoe rents one section of the building. I saw gorgeous wood lath canoes drying on racks, and some guys were trimming wood slats. They make these magnificent canoes totally by hand from willow and other indigenous woods.

I asked Mr. Pickering if I could take some pictures inside, and he generously said I was free to take pictures for about a half hour. A movie group was already inside and had set up lights with colored gels. Someone was going to pose with grandma Morris's 1962 Cadillac, which looked pretty good except for flat tyres. My favorite Panatomic-X film was in the film back. Being a slow film, most of my exposures inside were 1 sec at ƒ/5.6, but one exposure was 20 seconds. One of the cinematographers also admired my Hasselblad film camera.

During the mid-late 1800s, the ice trade was a major industry for the northern states of the USA. In winter, workmen sawed blocks of ice from frozen lakes and rivers. They stored the ice in specially constructed ice houses using sawdust for insulation. Led by the New England states, ice companies shipped ice around the world - as far as South America and even India.
In the Civil War, the union armies used ice to reduce fever of wounded souldiers. After the war, cattle companies depended on ice to ship beef to stock-houses in Chicago and to ship finished meat products to eastern cities and even across the Atlantic Ocean to Great Britain.
The problem with block ice cut from frozen lakes was loss from melting, despite the best attempts at storage and insulation. By the 1880s, improved refrigeration equipment became reliable and capable of mass ice manufacture. In the early years of the 20th century, commercial ice plants finally supplanted ice cut from lakes.
Mississippi History Now features a very interesting article titled "Making Ice in Mississippi" by Elli Morris (the great-granddaughter of the founder of Morris Ice Company). A Civil War veteran originally founded the Morris Ice Company in 1880.* The original company sold ice that had been shipped down the Mississippi River from northern states. The ice factory at S. Commerce Street was in operation from the 1920s to 1988. It was one of the largest ice distributors in Mississippi. According to Morris,

In 1988, Mr. Morris sold his business to a Carthage ice company. I do not know how long the factory on S. Commerce Street remained in production after that.

The inside of the Morris Ice Company is a amazing time capsule of early 20th century machinery. It is a spectacular setting of tubes, big machines, tools, belts, old shelves, and low-angle lighting. 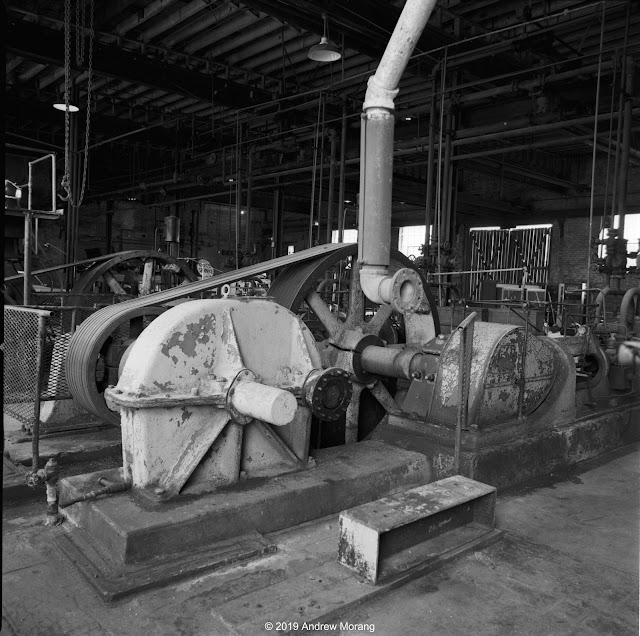 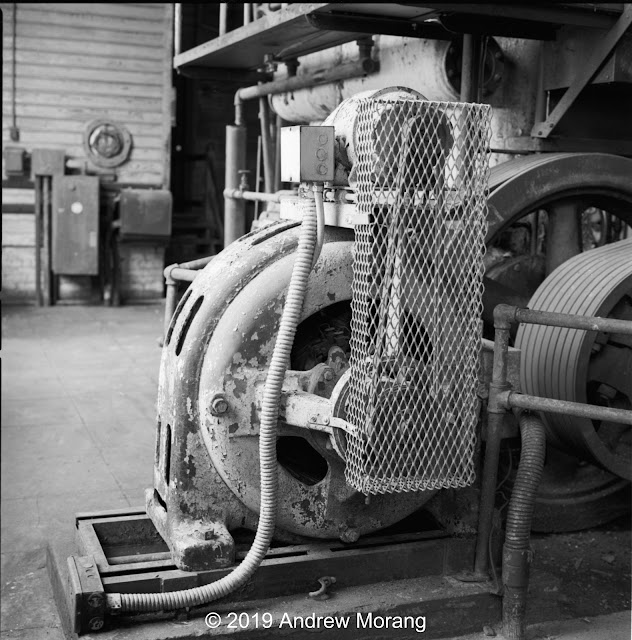 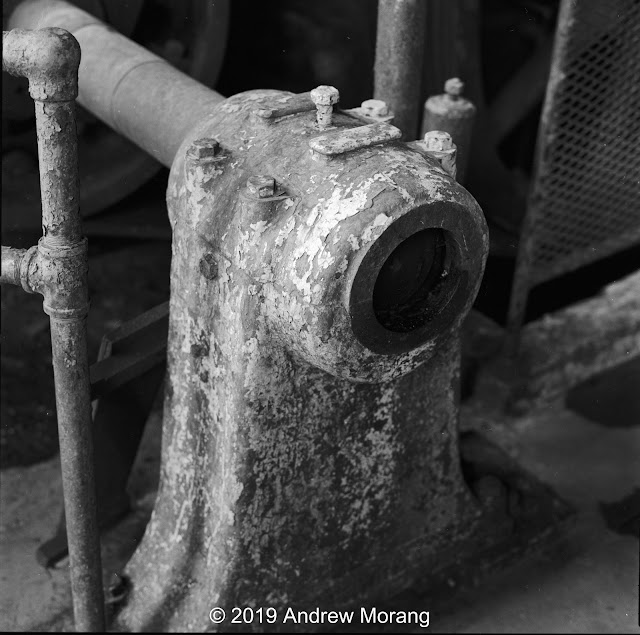 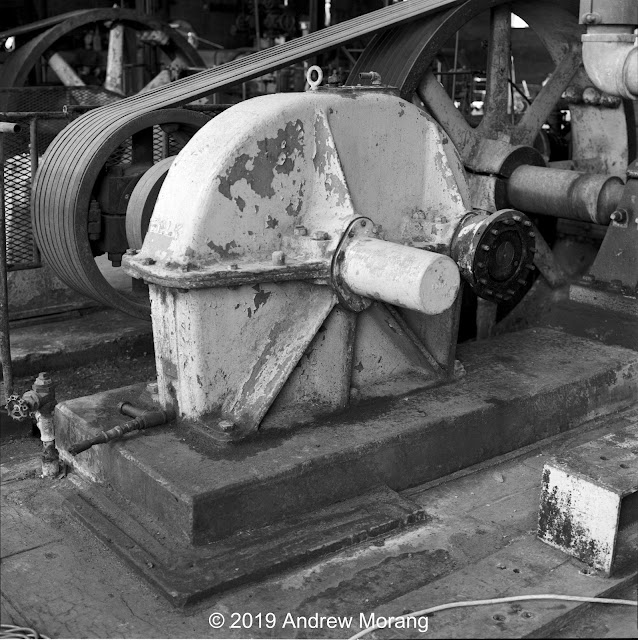 The belt-driven compressors were for an ammonia cycle, where chilled ammonia circulated through pipes in salt water tanks. The molds made 300-lb ice blocks. Trolleys ran on rails along the rafters to carry the ice blocks to waiting rail cars or trucks. 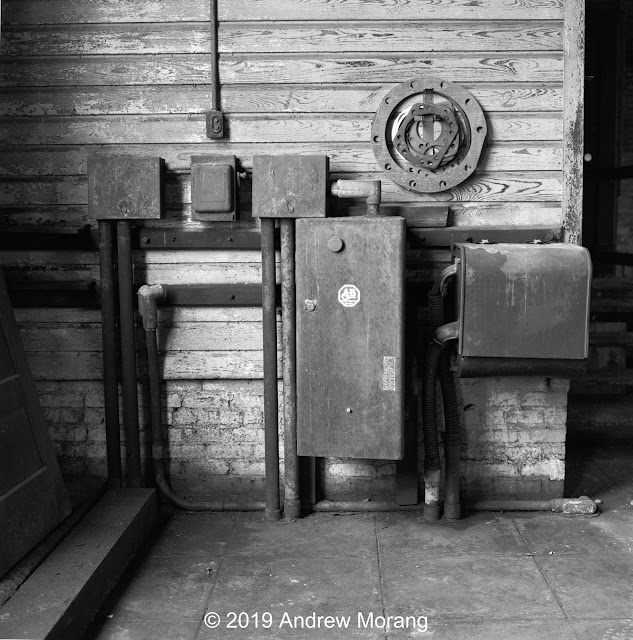 The company had its own electricity plant and sold excess electricity the City of Jackson. The electric pump outside (see photograph no. 2) was for the former well, which tapped an aquifer 600 ft below. All the levers and fuses on the electric control panel were mounted on slate panels. This had been a totally manual, old-fashioned operation. I thought it was amazing that the electrical panel had survived the decades. 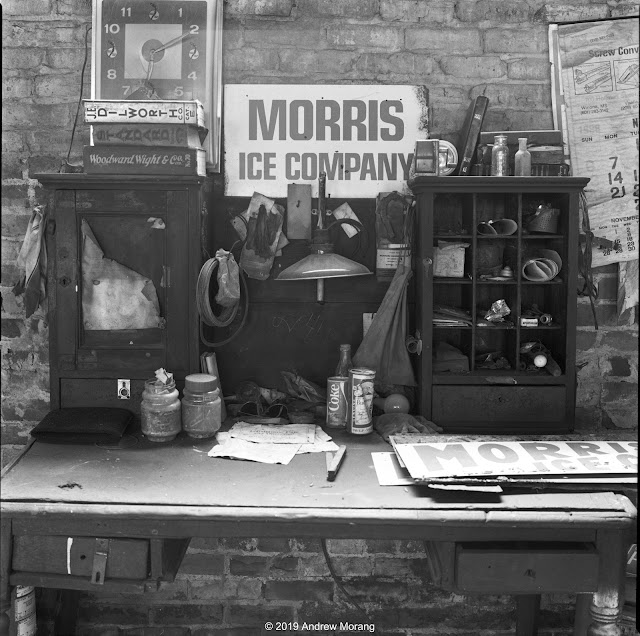 The desk contained time booklets for all employees back to the 1960s. There was no computer technology here.

This large old diesel engine would turn a pulley. Some of the compressors were turned by electric motors, but possibly this was a backup in case the electrical power failed (see the newspaper article quoted below). 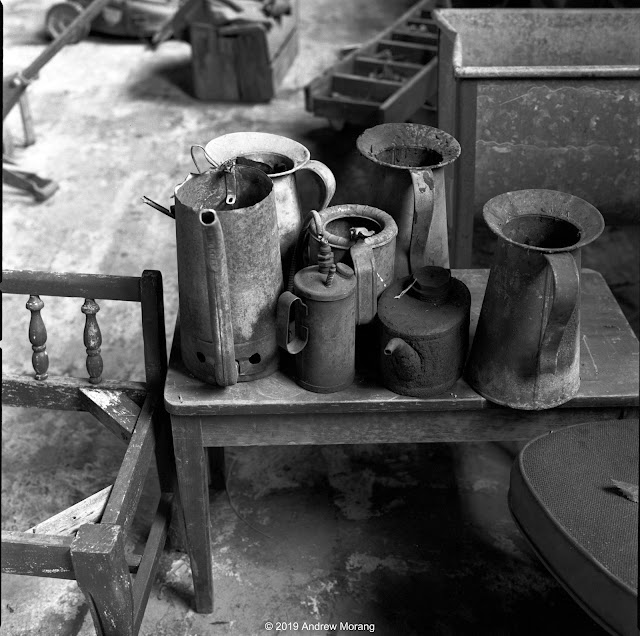 This is a collection of oil cans from the old days. I am sure there was a significant oil consumption keeping the many bearings lubricated.

When the movie crew started, we walked outside and Mr. Pickering took me around back to meet a photographer. This gent lives in a garage apartment. He also commented on the Hasselblad. He said he had just given Pickering one of his Nikkormat cameras and was going to teach him how to do film photography. I told them my first serious camera was a Nikkormat that I bought at Lechmere Sales in Cambridge, Massachusetts. The photographer said he knew the place because he graduated from Boston University in the late 1960s. Come to find out, we both used to visit the same camera stores in Harvard Square back in the day. He also used Panatomic-X years ago. Small world.

Most photographs are from medium format Kodak Panatomic-X film from a Hasselblad 501CM camera. As I noted above, most were 1 or ½ sec. exposures, and I used a tripod to stabilize the camera for all photographs. I specifically scanned at low contrast to show all the texture and detail of the machines. Click any photograph to expand it. When the virus restrictions are finally over, I will ask Mr. Pickering if I can return with my 4×5" camera and record some more of the textures and patterns.

108-year-old Morris Ice sold to Carthage business
The company, one of the city's oldest, will be called Jackson Ice Co

One of Jackson's oldest businesses Morris Ice Co. is being transferred to the owner of Carthage Ice Co. in Carthage. The company, created by a Civil War veteran in 1880, will start to make ice under the name of Jackson Ice Co. in about three weeks.

Wendell Harrell of Carthage will take over the business, starting today.
Hebron Morris, president of Morris Ice, will retain the property and lease it to the new owner.

Harrell is expected to keep most of the approximately 20 veteran workers at the Jackson plant, the second ice plant built in the state.

Morris, the founder's grandson, said the 65-year-old plant simply was not able to keep up with its more automated competitors. The building on S. Commerce Street re placed an earlier one destroyed by fire in 1923. "With the repairs and replacements required to build a modern plant, we just didn't feel like we could make that investment," Morris, 57, said Friday. He added that the company had been seeking a buyer for the past 45 days.
The plant makes 300-pound blocks of ice a foot thick and 4 feet tall that freeze in IV2 days. Yearly sales average $300,000.

Workers pour water into cans that are submerged in tanks cooled by ammonia coils and a water-salt solution. Today, most companies use electric-powered compressors to freeze ice in chips, a 30-minute process.

Morris said one of the rare features of the plant is that it uses gas engines to power the compressors. Those engines have been chugging loudly in the area since most Jack-sonians can remember. "It's going to seem pretty unusual for it to be quiet," Morris said.

Nice work documenting that marvelous industrial time capsule.
I have faint memories of ice being delivered to our house. It must have been prior to 1945.
It seems like keeping all the machinery in place would provide a great ambience for the repurposed space.

Thanks for sharing this wonderful information. View this also - campervan conversion companies