In an earlier article, I wrote about a handsome but neglected early 20th century house on Howard Street. I found more traditional houses nearby, on Spring and Crawford Streets. After looking at them, we will take a quick tour of urban decay in other parts of Vicksburg. This is a convenient way to combine photographs from around town. It is a long article, so please be patient. Click any frame to enlarge it; enjoy the view.


This cottage may be on its way to demolition. The chimney was once likely set up for a coal stove insert.
This house at the corner of Spring and Crawford Streets looked like it was in reasonable condition. The roof was recent. But the two electric boxes missing meter domes meant there was no power in the building. Usually this means there are no occupants - but not always.


A short article in the Vicksburg Post reported that the city inspector had condemned several houses in town. This little cottage on Crawford Street was on the list. The bridge in the foreground crosses Stouts Bayou, which is channelized in a concrete trough here.


Georgia and Sycamore Avenues drops down steeply to the south from MLK., Jr., Blvd. Twenty years ago, there were several homes on this lonely U-shaped road, but now I think all houses are gone. I am surprised that the city still maintains it. Kudzu is engulfing everything. It is like Vicksburg's version of a Secret Garden (apologies to Frances Hodgson Burnett).


Lovers Lane is an unusual street, with its romantic name. Unfortunately, some of the housing stock is distinctly unromantic. The lane ascends past the Cedar Hill Cemetery towards the Vicksburg National Military Park. For a stretch, Lovers runs parallel to Confederate Avenue in the Park but just south of the Park boundary. A few houses are scattered in the woods, one of which was the abandoned no. 246. In the garage was a big chunk of Detroit iron awaiting restoration. I think I will pass.


This old cottage on Harris Street has been empty for years, maybe decades. But it is not abandoned. Status: unknown.


Grammer Street was once lined on both sides with these little shotgun houses. One by one, they have been torn down. As of January 2021, these houses have been razed.


These two shotgun houses 2314 and 2316 Hunt Street, have also been empty for years. I think they are undergoing some degree of rebuilding. (Update Feb. 2021: the two houses are gone) 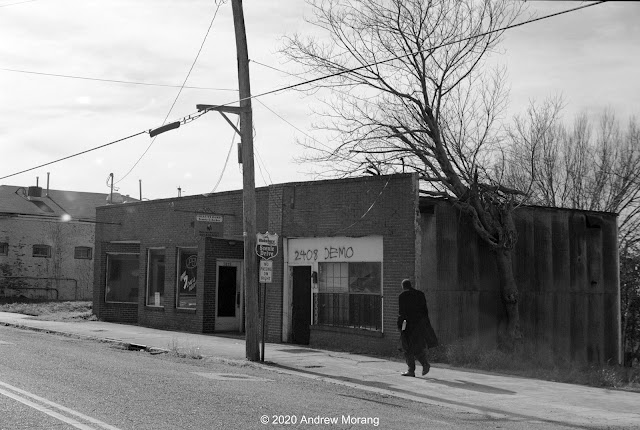 This store at 2408 Wahington Street has the word "DEMO" spray painted on the front. Does that apply to the whole building or just the unit on the right?

Oak Street runs semi-parallel to the river and has an impressive view. Many of the historic cottages have been torn down or been lost to fire over the years.


The severe duplex on Bowmar Avenue just east of the Drummond Street intersection has been demolished. The two shotgun houses are also gone.


Marcus Street (now called Sturgis Street) has lost many older wood cottages. Some have been replaced with modern brick structures. This house at 1515 is clearly modern, but I am not sure if it was from the 1960s or 1970s.


Franklin Street had three similar-looking duplexes. When I photographed them in 2018, all were empty and overgrown.


Grove Street is one of Vicksburg's historic streets with many older houses and cottages.

This is an unusual cottage on Pearl Street because it was made from cinder blocks. One by one, houses along Pearl have been torn down, and the area feels empty. I met a gent who grew up near here in the 1950s and 1960s, and he said it was vibrant with families and children then. 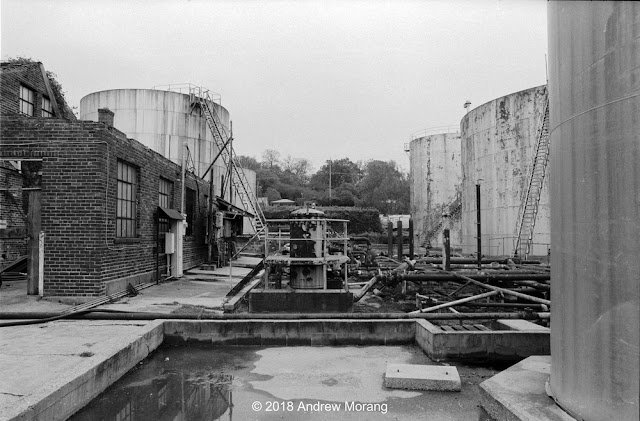 This old tank farm on Levee Street, at the west end of the old Fairground Street bridge, has been unused for at least three decades. The machinery building has lost its roof and has a Stonehenge collection of concrete support pillars. I can smell fumes here, so some of these tanks hold some chemical. There has probably been leakage into the ground.


Johnson Street has been methodically deconstructed, and there are progressively fewer and fewer houses as the years go by. I wrote about Johnson Street early in my blogging efforts, in January of 2010.

Here are two traditional shotgun houses from Yerger Street. They are long gone. These are 4x5" Fujichrome frames.


This former gas station at the junction of Warrenton and Wigwam Roads has been unused for years. Status: unknown.

This mess is part of the remnants of U.S. Rubber Reclaiming, at 2000 Rubber Way. According to the Vicksburgnews.com:

The Mississippi Secretary of State’s Office announced Tuesday, Dec. 10, that it has transferred approximately 12.6 acres of tax-forfeited property to the City of Vicksburg effective Dec. 4, 2019.

The Warren County tax collector conveyed the property, once owned by U.S. Rubber Reclaiming, Inc. to the State of Mississippi for the non-payment of property taxes in August 2010, the same month the company ceased its operations. The company was wholly owned by Obsidian Enterprises of Indianapolis, Ind.

So this rubber and other debris has rotted here for a decade. How many mosquitoes breed in the water? Any other pathogens? I wrote about the site in more detail in April of 2019.

The Hopewell Church is up on a bluff on the opposite side of US 61 from the Municipal Airport. I do not know its history. The poor old church is being engulfed by vines, and you can only see it in winter.


This little church is on Glass Road near the former entrance to the Marathon LeTourneau industrial complex. LeTourneau once built jack-up drilling rigs and other industrial machinery. At one time, a small neighborhood existed here. The pavement can still be seen in the woods, but all the houses are gone. I assume that this church once served the community.

Dear readers, this has been a rather haphazard tour around Vicksburg and Warren County. There is a lot of old architecture here, and we are gradually losing it. If any of you readers have suggestions of more places to see and photograph, please let me know.

UPDATE: I found a 2018 photograph of the tanks at the Levee Street tank farm.
Posted by Kodachromeguy at 08:00

Many of these remind me of the "company houses" I used to see when I'd visit my dad's hometown in coal country in West Virginia. Simple vernacular homes.

The street in the first shot is interesting. What kind of pavement is that?

Thanks, Jim. The pavement in the first photograph is poured concrete, but with a rectangle grid pattern placed when the concrete was first poured. These are the original 1920s concrete surfaces. I do not know if the pattern was intended to be decorative or was for better friction for horseshoes. Older concrete streets with a smooth surface are treacherously slick in the rain.

That was a lot of work for these images--nice job. I thought at first the warehouse pillars were a lot of tombstones until I enlarged the picture. It is an interesting shot--Stonehenge seems applicable! Wikipedia says the Hopewell Methodist Church and Cemetery was the earliest settlement in 1805 and the first church in Warren County. The cemetery is listed in MDAH Historic Resources, but no church.

Really fascinating tour. It's interesting to compare with the StreetView from 2013.

you are archivist for decline of america. great work.
i came across your site reading Paul Theroux, Deep South: Four seasons on back roads, Penguin, 2015. he documents this in words. provides a sketch of how this came to be.
also Linh Dinh, Postcards from the End of America. and
Belen Fernandez, Exile: Rejecting America and Finding the World
many thanks