En route to Union Church (see the previous article) I drove south to Lorman, Mississippi, and turned left (east) on MS 522. It is 2-lane and winds through woods and farms in west central Mississippi. I had never been on this road before and was not sure what to expect, but turned out very well, with some interesting old farmhouses and other appropriate decay.

This beat-up old House was sitting forlorn in the woods just off the road. Amazingly, the poison ivy was not too bad. These were 1 sec. exposures on Panatomic-X film.
The modern silos attest to active agriculture in the area. These are in Blue Hill, which looks to be not a real town but just spread-out farms and homes. Proceeding east on MS 522 (also known as McBride Road) I saw the standard mixture of trailers, old wood cottages, steel sheds, and an occasional McMansion. 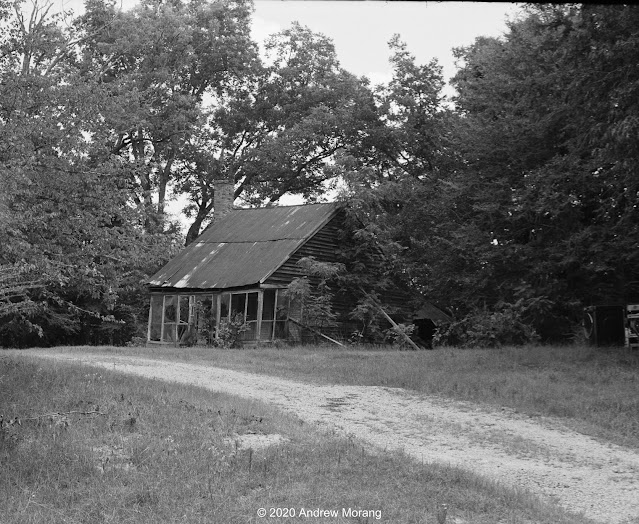 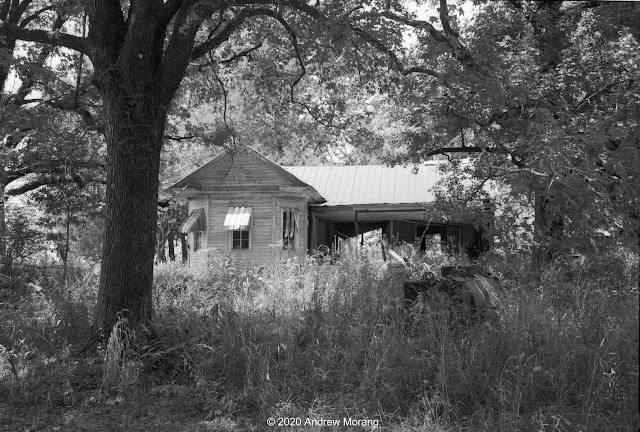 These were nice little farmhouses in their day, but many have been abandoned. Where did their occupants go? Do they live in new houses nearby, or did they move away? Are they happy in their new cities/states? Abandoned homes are a graphic symbol of the hollowing-out of rural America.Finally, two more examples of forgotten cottages or farmhouses in Pleasant Hill. I need to take more road trips into central Mississippi, which is nice terrain with its rolling hills and woods. It has a different character than the flat Delta, where I have explored often in the past.
Thank you all for riding along.
The photographs above were from 120-size Kodak Panatomic-X or 35mm Fuji Acros 100 film, exposed in a Leica rangefinder camera.
Posted by Kodachromeguy at 08:00

These photos remind me of rural southwest Michigan. Lots of the same kind of sort-of-still-holding-together structures.

Thank you for writing. Maybe I should take a road trip to SW Michigan and check the rural roads. I expect that the climate in Mississippi is more destructive because of the humidity and heavy rain, let alone the termites. Once the roof is compromised, wood structures do not last more than a few years.

It is telling how often structures like this appear to share characteristics once they reach this stage of deterioration. At the same time, there are always little observable differences, like the 3 windows with their awnings on that little gable ell. In the one with the bus, I could not even see it was a bus until you open the larger photograph; then you see the camper under the next building. Wondering is it storage or also abandoned; after all, the weeds are high, unlike the old trailer and cottage where the yard is neatly mowed. It is always a puzzle of a story your pictures tell. Nice work.

Many of these houses, like the one with the triple windows on the ell, were handsome and substantial structures in their day. If maintained, they are still totally usable now, some 100 years later. Note how the triple window face slightly different directions. An old-time builder in Houston (Texas) told me that this was not just aesthetic, but designed to capture even the slightest breeze in the pre-air conditioned era.