Dear Readers, I have written about US 80, formerly known as the Dixie Overland Highway, before. I covered it in three chunks: east Mississippi, west Mississippi, and east Louisiana. This time I will cover west Jackson between State Street and I-220.

In the post-war era, the Dixie passed south of downtown Jackson and served as a urban industrial and commercial zone. General Electric and other companies built factories there. Preservation Mississippi wrote about the Jackson Lamp and Glass Works in a 2016 article. On a recent MPB (Mississippi Public Broadcast) talk show, some reporters remembered how during the 1980s, 80 was the place to go for good restaurants and other activities. I recall a restaurant called the Green Derby.


Today, US 80 in west Jackson is horrifying. Hotels and motels are closed or cater to a rough clientele. Stores are shuttered. Factories are empty shells. Trashy cars crash over potholes and gaping expansion joints in the crumbling pavement. Payday loan stores occupy storefronts in seedy strip malls. Former filling stations have been converted into various functions or abandoned entirely.
Over the years, a coworker and I both lamented the decline of Jackson. He experienced it personally, having lived in west Jackson in the 1970s and early 1980s. A pertinent article from City Journal by Aaron M. Renn, titled, "The Lifeblood of Cities," describes the decline of so-called middle neighborhoods.


"The media tend to portray urban neighborhoods as either booming gentrified districts or zones of impoverishment. Neighborhoods in between get overlooked. But these older urban and inner-suburban “middle neighborhoods” may be where the next generation of urban problems—or solutions—will be found. Cities once held vast tracts of such neighborhoods, populated by workers in manufacturing or the civil service. With what analysts call a “barbell” economy dividing increasingly into rich and poor, it’s no surprise that urban middle-class neighborhoods are feeling squeezed."

In the post-war period, especially the 1950s and 1960s, Jackson was a bustling and thriving industrial and commerce city. (So were Greenville, Meridian, and other Mississippi cities). Thousands of modest homes were occupied by traditional middle class families, where dad was the main breadwinner and mom was at home or working part-time. Former middle neighborhoods, neither slum not wealthy, went downhill when the demographics changed as a result of loss of jobs, crime, drugs, deteriorating schools, and changing social conditions.

The author noted how today, there are an increasing number of single women households, and those families are often low income. The houses are not maintained and deteriorate. Soon, the entire neighborhood looks degraded. Therefore, people with means move to the suburbs, which, in USA, means white flight to government-subsidized suburban developments (i.e., socialism for developers). The older neighborhoods are left behind with diminished tax base, crumbling infrastructure, and crime.

This is a complex topic with numerous factors at play, such as tax policy, zoning codes, subsidy of developers, political corruption, and cheap land in the far suburbs. Regardless of the reasons, we have grossly mismanaged urban and suburban growth in the United States. Many American cities look more shoddy, dirty, and dilapidated than cities I have visited in the Third World, let alone anywhere in Europe.
This sign for Bel Air has a 1960s moderne appearance. The shopping plaza is pretty seedy, and some of the stores suffered a fire in 2011. The "Land of Sleep" has been gone for decades. However, the Patel Brothers store has an excellent selection of Indian and Pakistani groceries and spices. 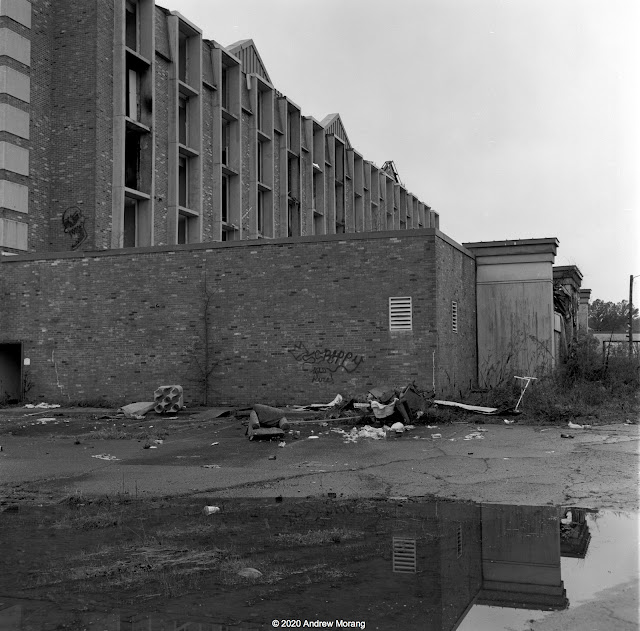 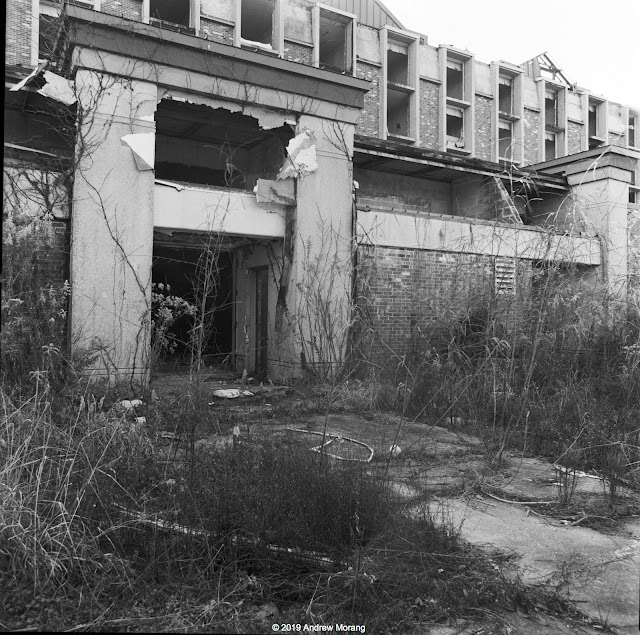 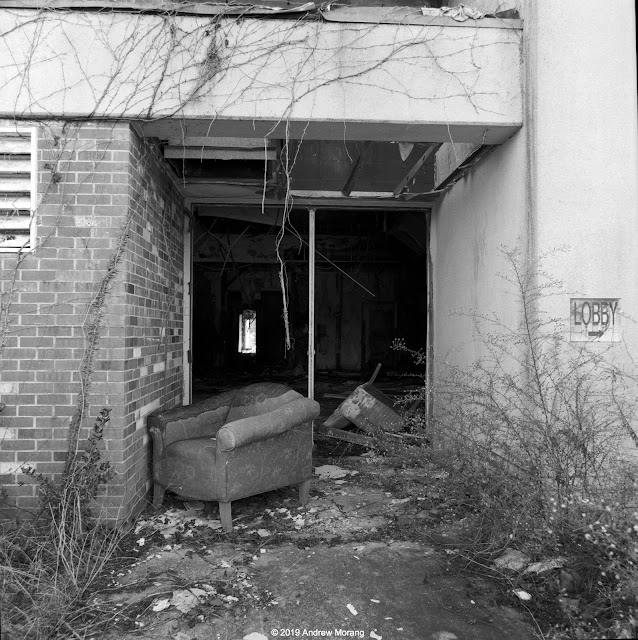 I saw a rutted driveway that went up a hill just west of Ellis Avenue. At the top, an urban decay treasure: the former Jackson Southwest Hotel at 2649 US 80. It was horrifying. The window frames and wiring had been looted by metal scavengers. I did not venture too far into the building by myself, but the lobby was worth capturing. (Click any photograph to see the gruesome details enlarged.)


JACKSON, MS (Mississippi News Now) - The former Holiday Inn and Jackson Southwest hotel on Highway 80 in Jackson was once a popular spot for dinners, meetings and social functions -- now it's a dilapidated eyesore.

"It makes everything around it look like Beirut. Does this not look like somebody bombed it. People leave their properties and go somewhere else and we allow them to do this," said Nina Holbrook of the Metro Area Coalition. Many windows on the building are broken, and the 14-acre property is overgrown. Recently someone broke through the gates and thieves have been rummaging for metal and copper.

Holbrook says the building was sold at auction to P & N Properties in Hattiesburg for about $50,000, and the owner was hoping to flip it for a huge profit, which never happened -- and now probably never will due to it's condition.

The Pearl Street AME Church purchased the wreck around 2015, but all plans for renovation have been thwarted by vandals and homeless occupants.
On the way back to I-20 via Ellis Ave, I saw another decay treasure, the former Best Western Metro Inn. The sign proudly proclaims "Gorgeous Atrium and Indoor Pool." Oops, what happened to the windows? This dump closed in 2015. WLBT Channel 3 reported on April 26, 2018:


JACKSON, MS (Mississippi News Now) - Properties along Highway 80 in Jackson continue to be targeted by metal thieves. The abandoned Metro Inn on Ellis Avenue and Highway 80 is the latest property to be hit.

Metal thieves have ripped the entire front off the rooms, including windows and doors, just to get to the metal frames.

Thursday, people were seen loading their haul into a truck and taking it to the nearby Can Man where it appeared they received cash for the stolen metal.

JACKSON, Miss. (WLBT) - It’s been the scene of numerous crimes and an eyesore for years, but this week the old Metro Inn is being torn down.

It’s a sight many locals were happy to see this week. The demolition of Metro Inn on Ellis Avenue is in full swing.

The property, which went into foreclosure in 2015, has been the sight of numerous crimes since then. Vagrants moved in tearing off scrap metal.

The square photographs are from Kodak Panatomic-X or Tri-X 400 film, exposed in Rolleiflex 3.5E or Hasselblad 501CM cameras. Praus Productions in Rochester, NY, developed the film. I scanned it with a Minolta Scan Multi medium format film scanner controlled by SilverFast Ai software.
Posted by Kodachromeguy at 08:00

Old roads, abandoned places, and film photographs? This blog is the mother lode!

Thanks, Jim. I try. There is plenty of material out there, just not enough time.....